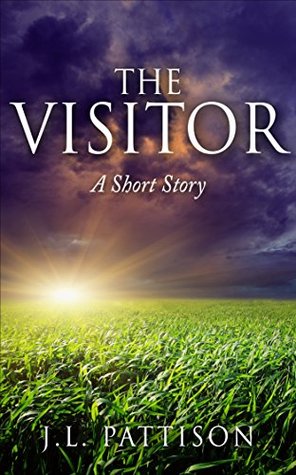 I have a big thing for characters. They are probably one of the most important aspects of a book to me, I need to know them and feel like they’re real in order to truly appreciate a book.

Not in The Visitor though. We barely get to really know Leroy, Theo and Quade but that doesn’t matter at all. The strong point of J. L. Pattison’s short story resides in its plot.

The Visitor won’t bring you a new story like we are used to read. It will mostly tell you historical events you already know of pretty damn well. But they will be presented intricated with a sotryline that will make you think twice about the world you are currently living in.

My reading experience resulted more in a reflective post-reading state of mind than a fangirling reaction while reading the book (also probably because since this is a short story it is pretty quick to read…).

The writing style wasn’t my favourite but that is just a detail since it was due to really really subjective reasons.

I recommend The Visitor if you would like to enjoy a quick story with a pinch of Science Fiction and which takes place in the USA between 1899 and 1963.

On a rural Georgia farm in 1899, a lazy summer afternoon is interrupted by the arrival of a man claiming to be from the future. The stranger intended to provide the nation’s forefathers with a letter detailing future events that lead to the demise of America in the 21st Century, but ending up in the wrong place at the wrong time, he has no choice but to leave the letter with the farmer.

Although no one ever believed the farmer’s story about the visitor, he’s afforded one last opportunity to recount the event with Theodore Garfield, a reporter for a local newspaper. But like everyone else, Theodore rejects the farmer’s story and dismisses the letter’s ominous warnings, including the prediction that America’s gradual collapse will begin with the murder of a future American president named John F. Kennedy.

Years later, Theodore’s encounter with the farmer is all but forgotten until a young senator named Kennedy is elected president. With the old farmer and his letter now long gone, will Theodore Garfield be able to prevent one of the most tragic days in American history?

Publisher: J. L. Pattison
Date of Publication:  August 7th 2015
Genre: Science Fiction, Short Story
Page Count: 31
Source: I received a copy of this book from the author in exchange for an honest review.

12 thoughts on “Review: The Visitor by J. L. Pattison”